Another Western Winner for the Dooleys

Another Western Winner for the Dooleys

Magnetic North finally got off the mark for the team and our owners Dooley Thoroughbreds by winning the Sean Cleary Memorial Handicap under apprentice Cian McRedmond in Roscommon. This win provided the yard our 30th winner this calendar year.

Having broke smartly from a wide draw, the 6yo Born To Sea gelding was ridden prominently throughout before Cian made his move just over 2 furlongs out where he picked up well to lead and win by a length and a quarter from the Brian McMahon trained Powersbomb.

Speaking afterwards, Ado said “He’s been a bit of a monkey and he let us down in Galway. We put a visor on him tonight as we know he has buckets of ability.

I was a little worried about the ground being too quick and we were drawn wide but I just told Cian to jump out and go forward, and not to give him a chance to think.

He did it quite easily and I think he wants every yard of a mile-and-four. We did drop him back to a mile but I think he’s better off in his comfort zone and being able to travel.

He’s been placed in premier handicaps before I got him and he has loads of ability. At least he got one tonight and we’ll look for something similar.

Cian gave him a super ride, he was very positive on him. He’s good value for the 7lb and I’m lucky to have him.” 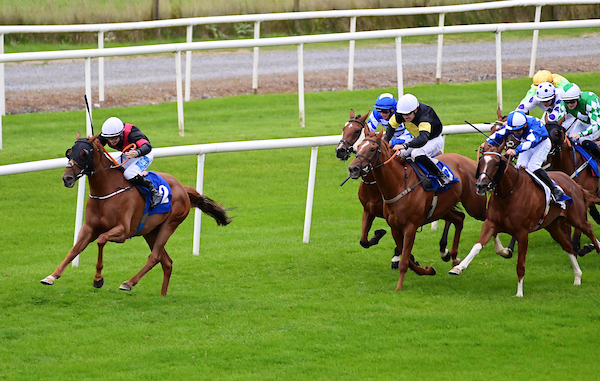