Bowerman returned back to the winner’s enclosure at Dundalk last Friday by winning the finale on the card, the Lengthen The Odds With BetVictor Race by the shortest of margins under champion jockey Colin Keane.

The Dutch Art gelding, purchased by Shamrock Thoroughbreds at the 2019 Tattersalls HIT Sale, showed signs of a return to form when finishing second from his previous outing in Dundalk 9 days earlier. Having tracked his previous victor in that race Dalvey early on, Colin made his move entering the straight where he challenged and led just over a furlong out and managed just to hold on the strongly finishing Isle Of Sark.
Speaking afterwards, Ado said, “He lost his form a bit after winning the Group 2 in Doha last year and maybe the ground there and travel might have just caused him to lose his spark. We gave him a nice long break in the Autumn to freshen him up to see if you could get it back and he showed that by going close the last night here.
I’m delighted to have another winner for the Total Recall Racing Club who are very loyal owners of mine” 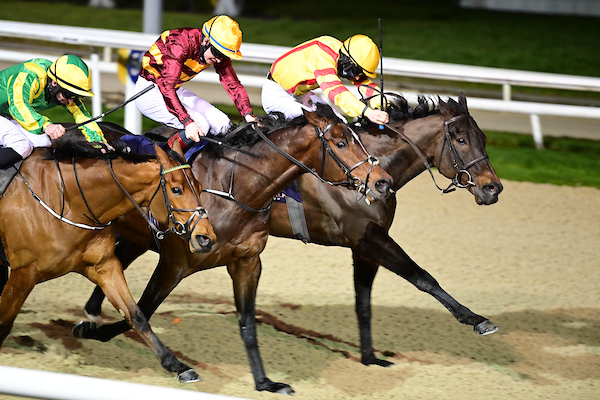