Destination Dubai Next For A Case Of You

Destination Dubai Next For A Case Of You

Our champion sprinter A Case Of You blew off his Winter cobwebs by landing the Dundalk’s Book Online @ DundalkStadium.com Race in impressive style on Friday last under regular pilot Ronan Whelan.

The Hot Streak colt was having his first outing of the year following his impressive 5th place placing at the Breeder’s Cup World Championships in California last November.
Having tracked the early leader Meishar early on, Ronan made his move just over a furlong and a half out where he quickly picked up & went clear at the furlong pole to go to win by 3 and a half lengths.

Speaking afterwards, Stephen Thorne said, “We’re delighted with the run, we were keen to get a nice prep run into him before we head on our travels.

The plan is the Group 3 on Super Saturday and then, all being well, we’ll end up in the Al Quoz Sprint on Dubai World Cup night.

Our apprentice Cian MacRedmond is a big part of this horse, he rides him every day. He works very hard and has prepared the horse beautifully again.

Ado was delighted and all being well, we’ll be on the flight at the end of the month”. 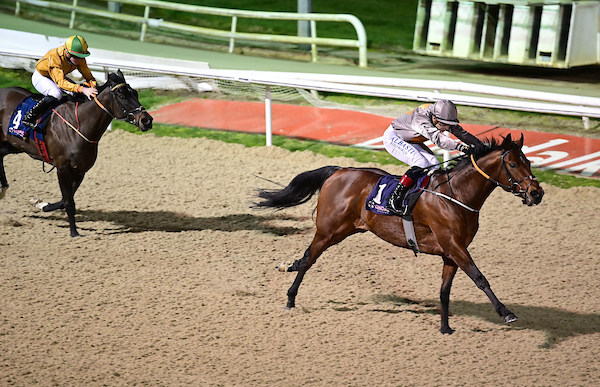