Alhaajeb, a £15,000 purchase by Shamrock Thoroughbreds at Tattersalls HIT July Sale last year for loyal owner Edward Battersby, led from pillar to post to win Division One of the Save 33% Buying Tickets Online Handicap at Gowran Park on Wednesday under Ronan Whelan.

The Exceed And Excel gelding  broke quickly from a wide berth in stall 12 & managed to grab the rail where he then dictated the race & to lead all the way to win by a length & a half from the Nigel Slevin trained Five Zeros.

Speaking afterwards, Ado said, “We gave him a bit of a breather after Dundalk. He was very consistent in his last few runs and we always knew he wanted good ground.

He will be for sale but I know he’s going to make a good hurdler. He’s a real fun horse and has improved plenty. Ronnie was just class on him. He gave him a real good ride and dictated it.

He’s a tricky enough horse to train. He has slipped down to a nice rating, he came out of England last year and he’s been a little bit disappointing. It’s great for Eddie who is a longstanding patron.

He’ll probably mix and match it and he’ll be an ideal summer horse over hurdles.” 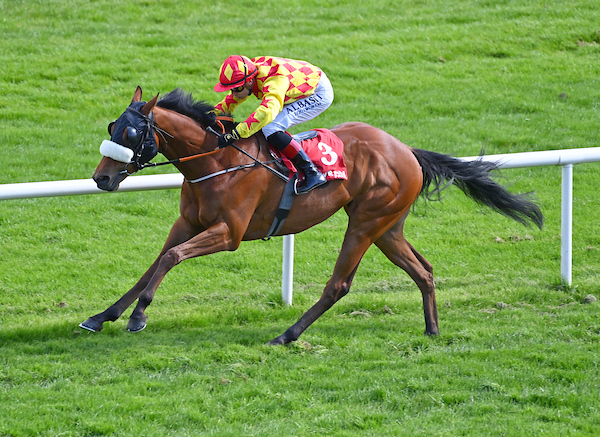