Praying Mantis made a winning start for the team when landing Division 1 of the Pat Smullen Coast To Curragh Cycle Handicap at Gowran Park on Wednesday night under stable apprentice Adam Caffrey.

The £4,000 purchase from the Tattersalls July Sale was ridden prominently early before Adam made his challenge entering the straight and despite edging left, the Epaulette mare ran on strongly to win by a length and three quarters from the Richard O’Brien-trained Cherub Rock.

Speaking afterwards, Ado said, “She was a very cheap purchase in Newmarket for four grand. She’s won around here before and had solid enough form before losing her way a bit.

She did that well enough and you won’t see her again until Laytown. Mark Devlin and the lads just love Laytown. She’s a fun horse and Adam gave her a great ride.”

Half an hour later, Clarinbridge lost her maiden tag at her fourteenth attempt when landing Division 2 Pat Smullen Coast To Curragh Cycle Handicap under Rory Cleary.
Riden prominently throughout, the Buratino filly made her challenge just over 2 furlongs out to challenge early leader Tai Sing Yeh and managed to lead close home to win by a head.
Speaking afterwards, Ado said, “She’s a game little filly. We gave her a break earlier in the year and when she came back she had two solid runs when she was second and I probably went to Killarney a bit quick after it.

I gave her another little break and she was game there today. Rory gave her a great ride. I said there is only one way to ride this track on this ground and if you are not up in the top four or five you are in trouble.

Des Whyte, a local guy from Skerries, has her in partnership with my wife and it’s the first time he’s been involved. It’s great for him to get his name on the scoresheet. She’s entered up in the Curragh and Dundalk so we’ll see.” 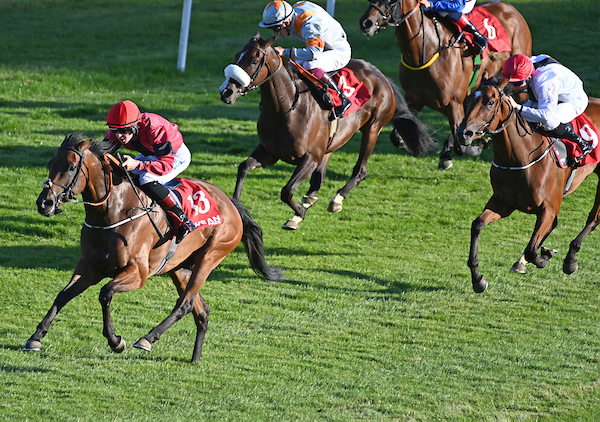