Sirjack Thomas landed his second Premier Handicap on the trot when landing the Colm Quinn BMW Mile at the Galway Festival under Mikey Sheehy this evening.

The 6yo Fast Company gelding ran midfield early on before Mikey made his move coming around the home turn where he picked up well coming up the hill to win by 3 lengths from the Sheila Lavery-trained Quizical.

Speaking afterwards, Ado said “We had a lot of bullets and I thought Saltonstall ran a blinder, he just got there too soon. The gap came and Sam went.

Sirjack was drawn wide and I just told Mikey to drop him in & ride him for luck as they would go a good gallop, which they did. He gave him a peach of a ride.

He only got in as a reserve last night and I rang Kevin O’Ryan as I was looking for a good 5lb or 7lb claimer.

Declan McDonogh said this fella was top class and I have to thank him too. He’s only ridden for me a couple of times but he’s a top class young fella and the claim was a big help.

It’s unbelievable to win it three years on the bounce. I’m lucky and privileged to have the lads here this time, the Dooley brothers are over from England, I’m lucky that they have faith to send me these horses to train.

“I have some really nice horses to train which make the job a lot easier. They are great guys and they leave everything to myself and Stephen.

This is a good horse and he’s really come to himself this year. The ground was probably as huge factor, he loves a little dig in the ground even though he won on Derby Day on good ground.

I knew he’d act on it and Saltonstall would act on it, which they did. Current Option didn’t run bad, the horses all ran well so I was happy.

He’s in again on Sunday. He’ll rock up again so will Current Option, Laugh A Minute, and Spanish Tenor if they are all sound.

Last year we were a little disappointed with him but he’s really come to himself this year, why I don’t know, but he got stronger and is a different horse this year.

We’d given up faith running him in premier handicaps last season and we got him handicapped over hurdles, he’s only 96 I think over hurdles!: 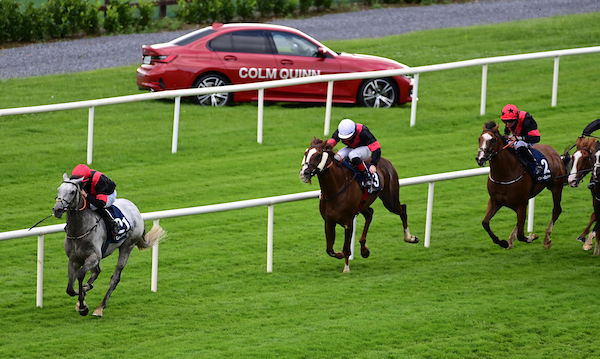