Ti Sento lost his maiden tag on his second attempt in Listowel on Sunday by claiming Irish Stallion Farms EBF Maiden at a colossal odds of 100/1.

The son of Invincible Spirit who cost £75,000 at the recent Goffs Doncaster Breeze-up Sale broke nicely under Ronan Whelan when the gates opened but Ronan was content to hold up his mount early on and sit behind leaders Vanguard Star and the odds-on favourite Congo River. Upon entering the straight, the favourite looked in trouble and when Ronan asked for an effort, Ti Sento quickened up impressively in the final furlong and a half to win my 3 lengths from the Donnacha O’Brien Blindsided.

Speaking afterwards, Ado said, “We were very disappointed at Navan but he missed the break and got terribly unbalanced and Ronnie didn’t knock him about.

He wasn’t a cheap horse from the breeze-ups but was showing us plenty at home. Someone said to me ‘you’ll be following these around’ but I said ‘believe me, he’s not a bad horse and all the boys had a few quid on him up above.

He certainly wasn’t a 100/1 shot but it was a fair race on paper. He is a good horse who will be sold. He was bought to be sold but don’t ask where he is going to go.” 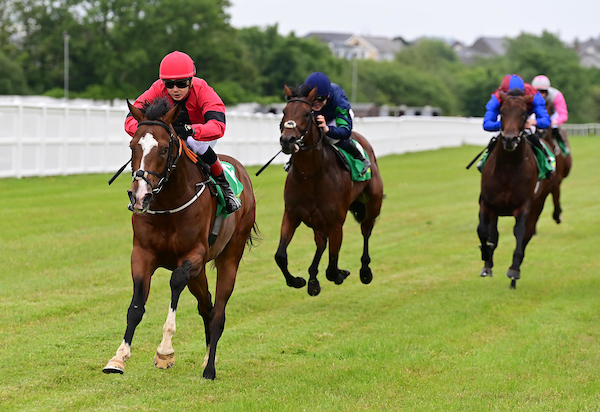