War Hero finally gets off the mark on the turf

War Hero finally gets off the mark on the turf

War Hero claimed his 7th career success by winning Division 2 of the Metcollect Handicap under our apprentice Cian McRedmond today at Down Royal.

The Declaration Of War gelding who had plenty of good runs on the turf in the past finished the race very strongly to win by 2 lengths from the Johnny Levins trained Tai Sing Yeh to claim his first turf win after 23 previous attempts.

Speaking afterwards, Ado’s assistant Stephen Thorne stated, “Cian gave him a great ride. They went very quick early on and the plan was to sit handy and be patient. Cian took the widest route on the outside coming home and he finished the race very strongly. He’s a good fun horse and he’ll see the likes of Bellewstown during the summer and he might run off his turf mark at Laytown following that. I’m delighted for Mark Devlin for him to have a win at his local track who is great supporter of ours”. 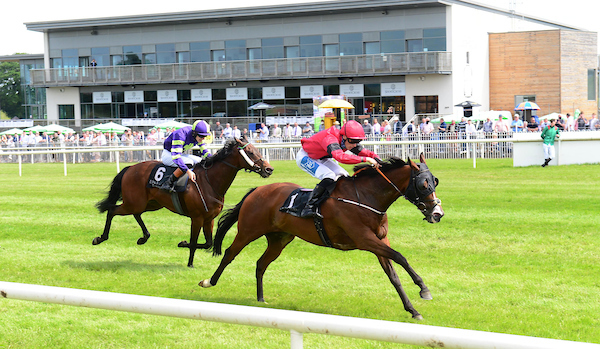